These Vegan Twice Baked Potatoes are a great potato recipe you'll want to save to share with dinner guests! Great all on their own or as a side you'll be sure to impress.

This recipe results in a chive flavored whipped filling and a crispy, salty shell. The potatoes are dressed in BBQ beans and a dollop of sour cream, turning them into a full-flavored meal or a great side dish option.

If you're browsing for more easy side dishes be sure to check out my favorites, Air Fryer Asparagus Recipe and Roasted Mushrooms with a Balsamic Glaze!

Right here, right now, I'll officially declare my admiration for a root veg that deserves a standing ovation from humanity - the ever-glorious potato!

Vegan Twice Baked Potatoes weren't something I experienced until my mid-teens, eating dinner at a friend's house, and at that moment, I remember thinking, what the spud is going on?! It's like creamy mashed potatoes but baked in a crispy salty shell with this herby flavor that makes it feel fresh? Mind-blown.

From there, potatoes have followed me in every step of my life. Like lit'rally, they are the positive omen that signals a significant change! For instance, senior year of high school, I went HARD on potato. I'm talking I ate some form of potato every day for a year straight (part joke, part wanting something around me to be consistent).

Spuds are the guardian angel that swoop in, ready to rally with me. I've loved their versatility since the beginning!

As usual, full instructions are available at the bottom of the page. But here are some extra tips for getting the best results on the table.

Which potato to use?

There are over 4,000 different potatoes varieties on this planet! Maybe six types are available in the produce section? Limited options, but the culinary world awarded one as the best baking potato, the russet.

We need high-starch, delicate flavor, crispy on the outside and fluffy on the inside for Vegan Twice Baked Potatoes. Large russet potatoes are going to be the best option for this recipe. They're typically bigger and have thicker skin, so grab four-six of them!

Twice-baked means they'll go into the oven twice, so in round one, we're prepping them and popping them in! After you wash the potatoes, lovingly stab them with a large fork all over to release steam while they bake. Then, slather them in oil and salt. I like mine salty; using my hands or a vegetable brush, I rub the oil on, and then salt goes all over them; I use a couple of tablespoons in total.

Set them on a parchment-lined baking sheet and pop them in at 375 F for 1 hour. Steaming them takes less time, but the skin becomes loose and frail. This recipe will require a little extra TLC but worth it in the end, trust. Baking time will vary based on the oven, so add more time needed.

Be sure to not break the shell

You'll know they're ready when you can pierce the crispy potato skins with a fork and the inside is light and tender; if not, bake longer, don't gamble.

Unless you have a game of hot potato scheduled, let them cool until you can handle them safely. Cut in half lengthwise, and using a large spoon, scoop out the insides without breaking the shell.

In an electric mixer, or if you missed arm day at the gym, take it on by hand with a masher or fork in a large bowl! Combine potato, plant milk, vegan sour cream, vegan butter, garlic, and spices until smooth and whipped with a creamy texture.

Minced cloves of garlic bring full flavor, but if garlic powder is all, use one tablespoon.

Transfer equal amounts of the mixed potato filling into each potato shell, top with a little vegan butter, a pinch of salt, and optionally some vegan cheese, and they're ready for round two! Bake potatoes for 15 more minutes. Tip: turn on the broiler for the last 3 minutes for an extra crispy top layer.

Once done, bring them out, allow them to cool a bit, and start dressing them in BBQ beans, vegan sour cream, and garnish with chopped chives or green onions. They're ready to devour, enjoy 🙂

These twice-baked potatoes can be dressed up in any way you like. I chose to warm some brown beans and BBQ sauce for this recipe, but the options are limitless—the ultimate comfort food.

I think Vegan Twice Baked Potatoes would also be a good option for a buffet-style meal. Setting out a variety of toppings for guests to create a unique personalized meal. You can even have a theme like:

I love meals with a unique twist. Whether for just your family or hosting others, having a buffet bar to dress up a potato makes the meal memorable and fun to talk about. It ensures your guests will have a higher chance of enjoying their meal when there are more options and flavors to satisfy! 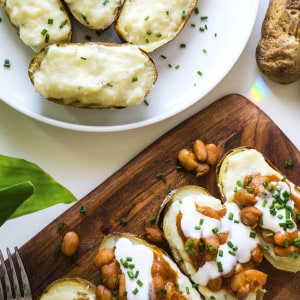 My Vegan Twice Baked Potatoes are a recipe you'll want to save to share with dinner guests, they're that good. Great all on their own as a main dish or a side you'll be sure to impress. This healthy recipe results in a chive flavored whipped filling and a crispy, salty shell. The potatoes are dressed in BBQ beans and a dollop of sour cream, turning them into a full-flavored meal.
Print Pin Rate
Course: Side Dish
Cuisine: American
Prep Time: 10 minutes
Cook Time: 1 hour 15 minutes
Total Time: 1 hour 25 minutes
Author: Barbara Zackey

Did you make this recipe?Leave a comment below letting me know how it went & don't forget to give it a star rating ⭐⭐⭐⭐⭐. Mention @BotanicalBarbara or tag #botanicalbarbara, I love to see your creations!

Welcome, I'm Barbara! This space is dedicated to sharing content that inspires the reader to embrace ownership of their health through education, nourishing recipes, and holistic lifestyle inspiration.