These fun Earth Day Donuts are decorated as an ode to Earth Day and made 100% from whole food plants! They're easy to make, tasty, and, might I say - cute! Baked instead of fried and filled with clean, healthy ingredients. The sweet buttercream frosting is colorful with all-natural plant dye: blue and green spirulina powder. Donuts are a great breakfast treat, midday snack, or share with friends.

This vegan donut recipe was perfected; seriously, I made them four times, getting the flavors right. After the second time, I wasn't sure if it would work. It turns out that cinnamon, cardamom, and ginger make the perfect spiced donut!

You probably stumbled on this post by searching for Earth Day dessert ideas! If you're looking for healthy plant-based dessert options, check out my Rosemary Chocolate Chunk Cookies or Fluffy Vegan Cinnamon Rolls - they SLAM!

Technically doughnut is the correct way to spell this tasty American baked good. While donut is the abbreviation. For me, the donut abbreviation feels right and aesthetically looks right.

How's the texture of these donuts?

Traditional donuts have many popular flavors like chocolate glaze, sprinkle donuts, and vanilla glaze. This easy recipe can be adapted to whatever flavor you desire!

The texture of the donut is a fluffy, cake-like donut - the type you'd like to dunk in a warming beverage or wash down a bite with an iced coffee.

Although the ingredients are made from whole foods, you'd never know they are made without eggs, dairy butter, or cow milk. I'd compare them to the traditional donut texture.

These healthy donuts will be hard to keep around, and not only because they're so tasty! Since they are only made with clean, simple ingredients, the freshness expires. Which also means that you'll need to devour them within three days.

Remember that the printable recipe with full instructions is at the bottom of the post.

This recipe shares two options for vegan icing. Both will result in a sweet, delicious donut topping. Either icing is prepared in minutes while the donuts cool, and both use a natural dye like spirulina, beetroot powder, or turmeric - depending on the color you'd like.

Monk fruit powder is used for both methods as a powdered sugar replacement. A piping bag is required to make the vegan buttercream if your choice is based on aesthetics.

🍩Vegan butter - my preferred brand is Miyoko's Creamery, based on simple ingredients.

🍩Monk fruit powder - a sugar-free alternative to powdered sugar, the brand I use is Lakanto, linked here.

So as you can see, vegan butter or plant milk is the difference. The traditional glaze will be a thin glaze that brings in sweetness while the vegan butter whips into a creamy cake-like frosting. You can't go wrong with either one!

For the Earth day design with the buttercream icing, you'll need a simple piping bag with a point in a star shape. Since the icing is mainly made with vegan butter, whipped in an electric mixer, you'll need to work semi-fast. Don't worry, not super speed, just focused and uninterrupted.

Fill the piping bag with the blue ocean color first, leaving "holes" or gaps for the green land.

Stick a sweet strawberry on the side using a small heart, star, or flower-shaped metal cutter.

For the glazed icing, keep it in a bowl and dip the top of the donuts down halfway. Place the donut face up on a wire cooling rack, and in minutes, the icing will become dry and harden.

How long do these donuts keep?

About three days. If you're not planning on eating the donuts within two days, leave them uniced in the refrigerator. That way, you can reheat them and ice them before eating.

Can they be frozen?

Yes! Freeze them, uniced for up to one month. I do prefer mine fresh since they're easy to make, but if frozen is necessary, that works! 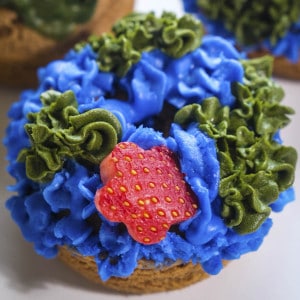 These fluffy donuts are decorated as an ode to Earth Day and made 100% from whole food plants. These easy baked vegan donuts are tasty, and might I say - cute! Baked instead of fried and filled with clean, healthy ingredients. The sweet buttercream frosting is colorful with all-natural plant dye: blue and green spirulina powder. Earth Day Donuts are a great breakfast treat with a cup of coffee, midday snack, or share with friends.
Print Pin Rate
Prep Time: 5 minutes
Cook Time: 15 minutes
Total Time: 20 minutes
Servings: 6 donuts
Author: Barbara Zackey

🍩The butter should be cooled and cubed from the fridge; you don't want melted vegan butter. 🍩For a glazed donut without a frosting-like topping, see above for a glazed alternative. 🍩For the glaze, dip the top of the donut into the icing bowl, then transfer to a wire rack. 🍩For best results, you must allow the baked donuts to cool thoroughly before applying either icing option.
Did you make this recipe?Leave a comment below letting me know how it went & don't forget to give it a star rating ⭐⭐⭐⭐⭐. Mention @BotanicalBarbara or tag #botanicalbarbara, I love to see your creations!

Other vegan dessert recipes to check out:

Welcome, I'm Barbara! This space is dedicated to sharing content that inspires readers to embrace ownership of their health through education, nourishing recipes, and holistic lifestyle inspiration.