My BBQ Pulled Oyster Mushroom Burrito showcases how versatile oyster mushrooms are at setting your tastebuds off right. Slowly marinated and then simmered in homemade BBQ sauce, bringing a familiar pulled pork texture and taste. I've decided to wrap these bangin' bbq mushrooms in a gluten-free burrito for this recipe. 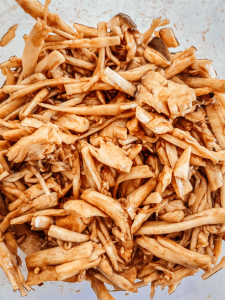 If you're a fan of oyster mushrooms, make sure to check out my other recipe Oyster Mushrooms + Broccoli Stir Fry. For this one, I pull them with a fork from top to bottom, they quickly fall into line, and you'll have them shredded in no time.

It's essential to give them at least 30 minutes to marinate in a small bowl; you can prep these a day in advance and have them bathing in the fridge. If you have a favorite BBQ sauce, feel free to use that. Otherwise, my homemade sauce is made with whole, clean ingredients and has a sweet but tangy flavor.

If you have extra or make a big batch, they will last in an airtight container for up to 5 days in the fridge. Just reheat when you're hungry! 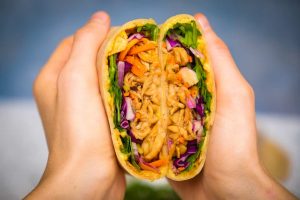 I decided to make a pulled mushroom burrito vs. sandwich, but there are so many ideas for this recipe:

I prefer Siete burrito shells; these can be found at Whole Foods (or grocery stores with a similar vibe), Target, and Costco. They are grain-free, corn-free, and gluten-free with various base options like almond, cassava, coconut, etc. Alternatively, you can enjoy flour or corn tortillas.

I warm them up on a skillet, throw down some vegan cheese (Violife is my favorite), and break up some chips over the top. Once warm (1-minute max), I stuff my burrito with lettuce or arugula, red cabbage, carrot sticks, sliced red onion, and BBQ Pulled Oyster Mushroom. Fold in both sides, flip and roll - return to the non-stick skillet to medium heat until there's a light crisp to the top and bottom, then cut down the middle.

Serve with a side of avocado with lime juice, hot sauce, pico de gallo, or some vegan sour cream. 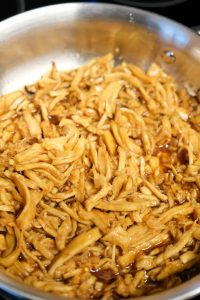 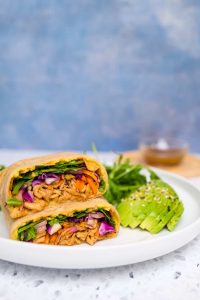 Burritos are a quick, straightforward comfort food, easily put together. Combining veggies with this BBQ Pulled Oyster Mushrooms brings a savory, sticky, crunchy feel to your tastebuds. Don't hesitate to reach out in the comments below, especially if you made this dish; I'd love to hear how it turned out! Pin for later, and don't sleep on checking out my other healthy, vegan recipes at BotanicalBarbara.com.

[lt_recipe name="BBQ Pulled Oyster Mushroom Burrito" servings="4-6" prep_time="5M PLUS 30M MARINATING" cook_time="10M" total_time="15M" summary="My BBQ Pulled Oyster Mushroom Burrito showcases how versatile oyster mushrooms are at setting your tastebuds off right. Slowly marinated and then simmered in homemade BBQ sauce, bringing a familiar pulled pork texture and taste. I've decided to wrap these bangin' bbq mushrooms in a gluten-free burrito for this recipe." print="yes" image="https://botanicalbarbara.com/wp-content/uploads/2022/02/DSCF4195-200x300.jpg" ingredients="3-4 king oyster mushrooms;;Mushroom Marinade:;½ tablespoon cumin;1 teaspoon pepper;1 teaspoon salt;½ teaspoon red pepper flakes;1 tablespoon tomato paste;1 garlic clove, minced;⅓ cup coconut aminos (soy sauce substitute) ;1 tablespoon maple syrup;;For Burrito:;Siete burrito shells;1 cup chopped lettuce or arugula;½ cup sliced red onions;½ cup red cabbage;1 large carrot, julienned;Optional: vegan cheese and tortilla chip crumbs ;;" ]Prep mushrooms by pulling them with a fork top to bottom until shredded.;Combine all marinade ingredients, wisk, and cover shredded mushrooms mixing thoroughly.;Allow mushrooms to marinate in mixture for at least 30 minutes (they can bathe in the fridge for up to a day if you'd like).;In a large skillet on medium-high heat, place mushrooms and marinade onto the pan. You allow them to sizzle until warmed and golden, about 5 minutes. ;Warm burrito shell on the skillet, add cheese and tortilla crumbs if using, no longer than 1 minute or shell will harden.; transfer to a hard surface and fill with pulled mushrooms, greens, red cabbage, onion, and carrot.;Fold both sides in, flip bottom, and roll closed - bring back to skillet until top and bottom are crispy and hardened.;Slice down the middle, serve and enjoy!;[/lt_recipe]

Welcome, I'm Barbara! This space is dedicated to sharing content that inspires the reader to embrace ownership of their health through education, nourishing recipes, and holistic lifestyle inspiration.